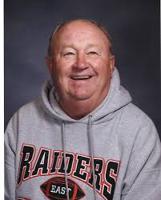 Coach Walt Fiegel served as the Executive Secretary of the Iowa Football Coaches Association from 1977-1994, 17 years!

This award recognizes a person who embodies the high character, integrity, concern for kids, and service to the profession that were evident during Coach Fiegel’s career.

The 2020 Walt Fiegel Award Winner is:

Steve Milder began the 2020 season seventh in wins among active Iowa high school football coaches, leading teams for 45 years as a head coach. In his tenure at West Central, Maynard, he has coached 16 playoff teams including a state championship squad in 1997 and a 1978 runner-up. A graduate of Regina, Iowa City and member of their athletic Hall of Fame, he competed in football and baseball while a student at the University of Northern Iowa. Milder has coached four sports at West Central and been active in many school programs. He has facilitated the Holiday Boost Program to provide Christmas for families in his community for over 25 years. In 2013, he was selected for an Excellence in Mentoring award by the Iowa Mentoring Partnership. Milder and his wife married nine days before his coaching career began and they remain together through 49 football and 143 total sport seasons. Their sons are Matt and Mark, and they have three grandchildren: Mackenzie, Alexis, and Jace.

Interested in becoming a sponsor of Iowa Football Coaches Association?

Each fall, our footballs sail across college stadiums and get spiked into end zones all over the country. No company on the planet ships more FBS college game balls than Big Game does. Now, in addition to shipping them to collegiate teams nationwide, we’ve made college game balls available to diehard fans! Our collegiate footballs are the exact same balls the teams play with on Fridays and Saturdays, and they are a truly unique collectible. Whether tossing the pigskin at tailgates or using it as a display piece, our college footballs never disappoint.

These days, we’re nationally recognized for our college and high school footballs, but that’s not where we began. Big Game was founded when our owner Chris Calandro wanted to customize a few footballs as gifts but was turned down by the large football manufacturers because his order was too small. The reputation we built by creating custom footballs has opened many doors for us, but those custom orders to commemorate special occasions are still some of our personal favorites.

Ace Fundraising has long been a strong supporter of high school football in Iowa and the IFCA. Their generous contributions over the years have supported numerous awards and other programs. Today, Ace Fundraising is the title sponsor of the biggest clinic in Iowa - the IFCA Coaches Clinic.

Thank you Ace for your support!

Want to participate in your local community? Become a  sponsor for Iowa Football Coaches Association and support youth in your area.